I realize now I should have taken many more of these. That will be my goal for next year. 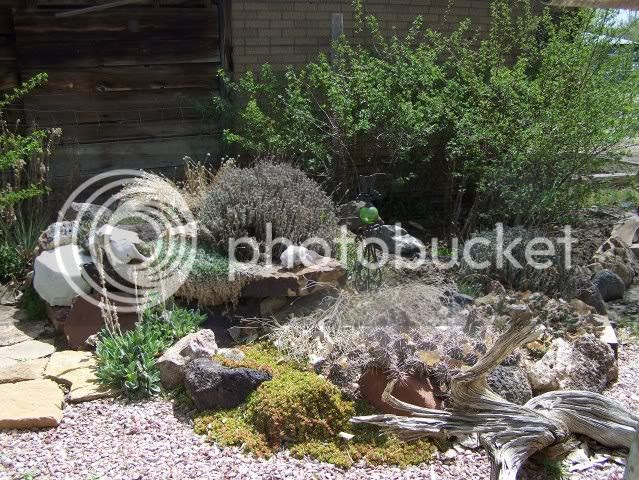 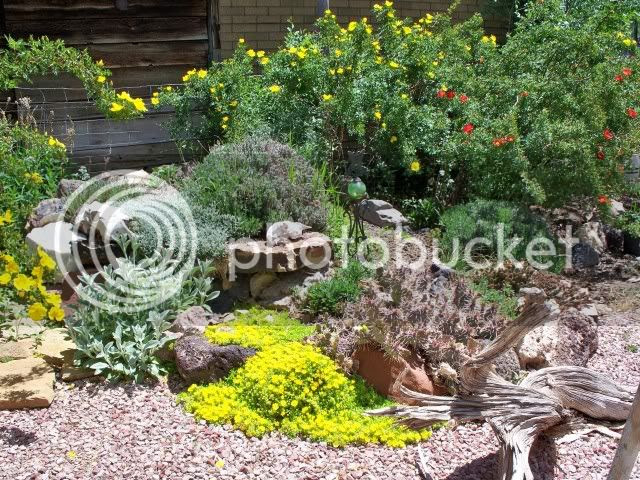 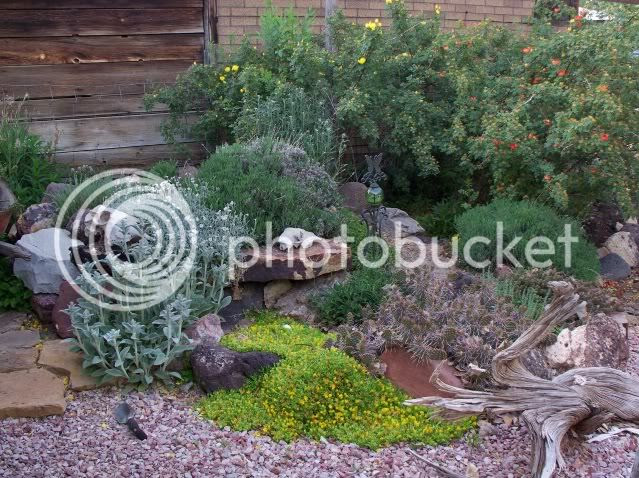 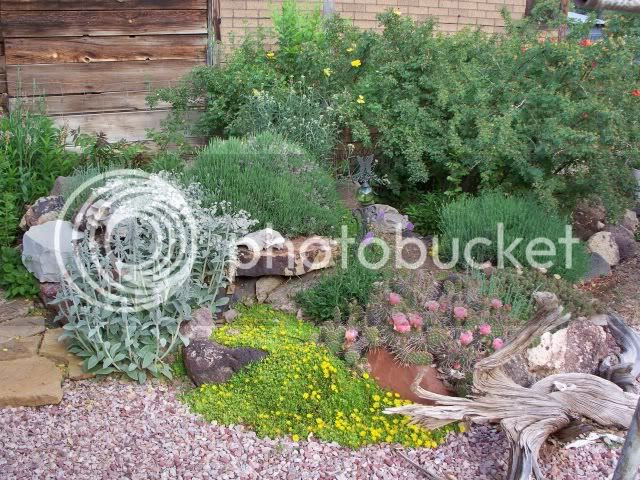 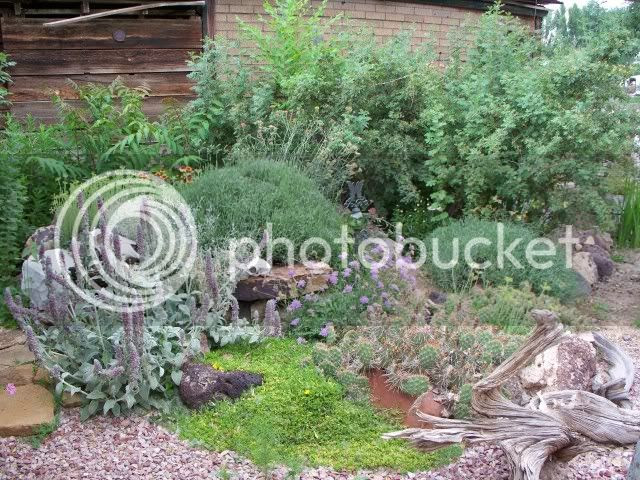 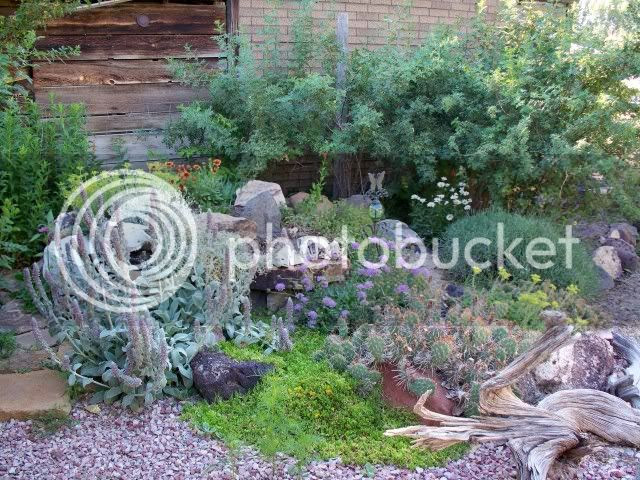 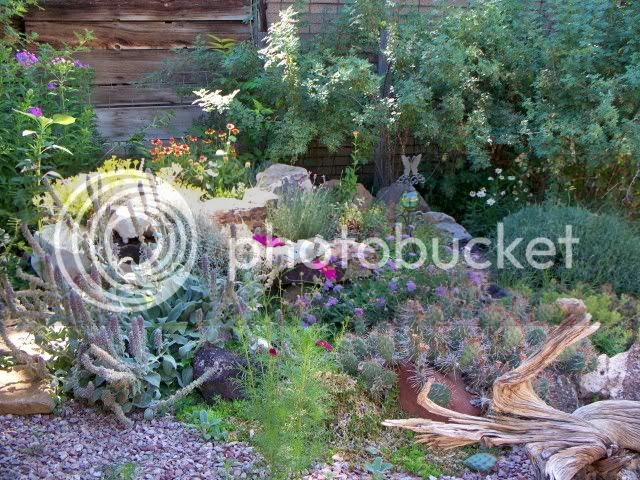 This is kind of cheating because it's not blooming anymore. It's been harvested and dried. 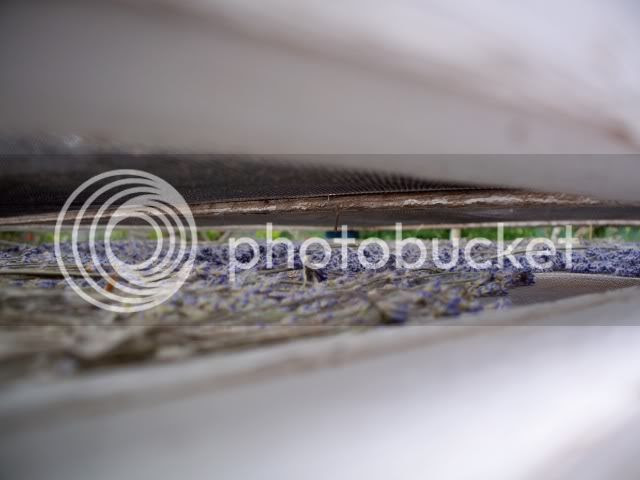 I made a number of different items with the lavender last year including sachets, eye pillows, and small bouquets.

This year I tried a few recipes, combined a couple to make my own, and baked lavender cookies to sell at the farmer's market. I also made little copies of the recipe and enough lavender buds to make 3-5 dozen. I hope to sell quite a few. 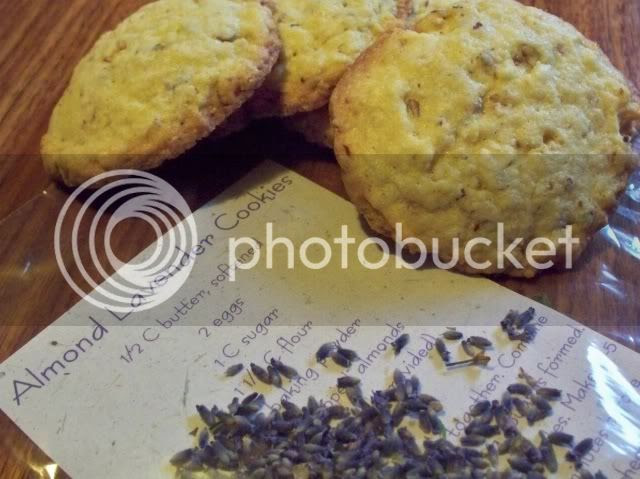 Next year I'll have 22 lavender plants to harvest versus the 2 I had this year. I anticipate lavender soap in my future.
No comments:

These are your run-of-the-mill succulents that come in the "rock garden mix" at any local nursery. I like them because they spread well and bloom late, adding color when much of it is already gone. It is the cultivated version of the wild one I featured earlier in this series. The only reason you can see it these days is because I removed and divided a huge lavender plant that was dwarfing the whole top of the rock garden.

I absolutely loved the way the morning light hit it making it look like the sunshine came from within. 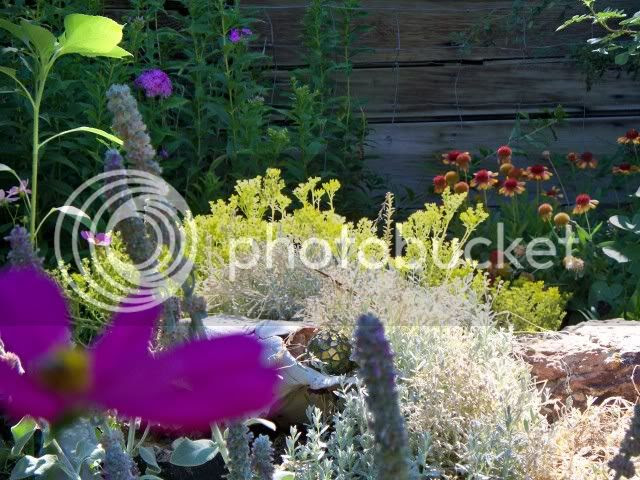 On the Wrong Feet

Willon dresses himself these days. I ask him to as long as we're not in any dire hurry. He's always putting his shoes on the opposite feet. He knows this. He likes it that way. I let him, who cares?

It kinda sounds like I'm annoyed by this but I'm really not. I know it's not a judgment on me or him. We smile, and he's so very proud of himself that people notice his independence. He doesn't appear to get tired of people telling him about his shoes, or the occasional inside-out shirt or backwards pants for that matter.

He's a clever boy, though, thinks for himself.

At the farmer's market last week several people noticed his shoes. At one point a nice little grandma said, "Well lookie there. Your shoes are on the wrong feet!"

Willon replied, "No, those are MY feet!"
3 comments:

Since reading Temple Grandin's Thinking in Pictures, well really since the very beginning of ST, I teach Rhetta everything using pictures. I use a great many photographs but I also draw quite a few. We've especially been working with series of pictures to go along with social stories I write.

Today, Rhetta tried to teach Lola (one of our cats) how to retrieve a ball. She got the idea from Martha Speaks. Martha is a dog however and all we have are cats and chickens. She chose a cat to train.

It was so cute. I was too busy relating what she was doing to her dad on the phone to take pictures or video but I'll describe it as best I can.

Outside, Rhetta followed Lola to the neighbor's yard and back into the driveway. Here the training began. She spoke very well and very clearly to Lola, "Come here, Lola. Retrieve the ball, Lola. Retrieve the ball. Come here. Retrieve Lola!" She threw the ball gently and was uncharacteristically patient yet persistent. Lola, bless her heart, stayed near Rhetta throughout the lesson and actually appeared to come when asked. It was like a gentle yet stubborn ballet.

The cuteness of my girl is a given, I know this. The interesting part was the picture she drew and used during the entire lesson with the cat. She held it in one hand facing Lola while rolling the ball with the other.

It clearly shows the cat exactly what is expected of her. I don't know why she didn't get it. *wink 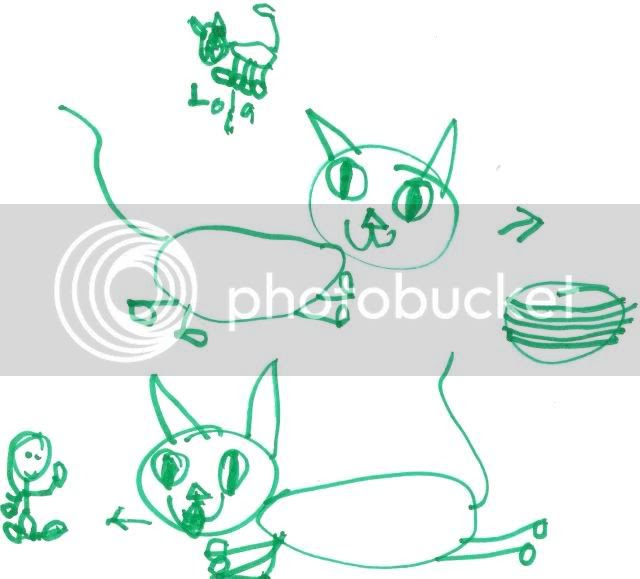 Yesterday at the farmer's market I took the kids and my tote bags and sat in the shade of a sycamore tree all morning passing the time, talking with friends and generally having a lovely morning.

The gal next to us brought her daughter who brought along some baked goods. Those are always hard to resist. I bought some dinner rolls for Willon and I to munch for our snack (Rhetta having her own GF snack lest you think I was depriving her of sharing in our yummy treat). He liked these very much.

Later, as we were chatting with these women, I turned to find him in our chair snarfing a blueberry muffin. I looked at him shocked and asked him if he just took that muffin? He, in blueberry rapture, nodded assent and kept on with his snarfing. I got down face to face with him and explained very carefully the rules of exchange, gave him two quarters to give the ladies, then doled out the consequence.

I told him he'd have to take 50¢ out of his piggy bank when we got home to pay for the muffin, and I took what was left of the muffin away. He seemed completely non-plussed over the whole situation, said he was sorry to the ladies, and went about being cantankerous as usual.

Here I have to say that I mostly gave him that consequence to look good in front of the gals because we have never done anything with the piggy banks. We don't joyfully drop spare change into the kids' hands and have them put it away safe in their little banks like a Norman Rockwell setting. We've not addressed that in our house yet because frankly we rarely have any spare change. I was thinking they had a handful of pennies in each one at best. I kinda thought it was a good way to introduce it however and planned to get them out today and talk about it.

This morning Rob got up early with the kids and blissfully let me sleep in. When I finally did roll out of bed Rob was waiting to tell me this story.

First thing this morning, all on his own, Willon got up, reached to the shelf above his bed, and got down what he thought might be his piggy bank. In was in fact his sister's piggy bank, his being an elephant bank, but that's OK. He dumped it out on the bed and started counting out pennies until he got to the highest number he can count. He put them back in and went out and put it in the mailbox, put the flag up and said, "I'm putting my piggy bank in the mailbox so the mailman can take it to the farmer's market and pay all my bread." 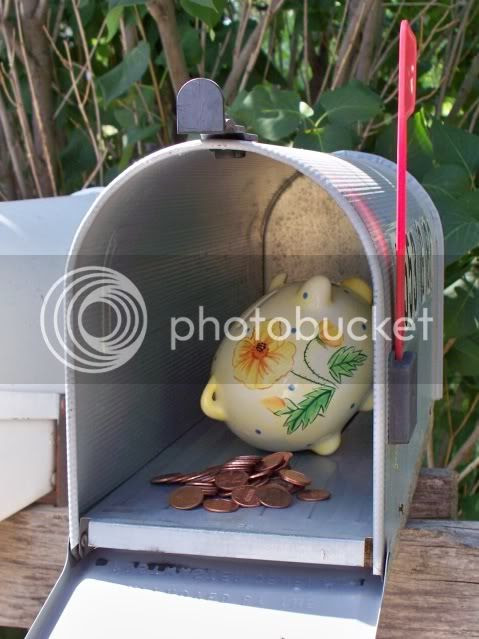 "Chronic remorse, as all the moralists are agreed, is a most undesirable sentiment. If you have behaved badly, repent, make what amends you can and address yourself to the task of behaving better next time. On no account brood over your wrongdoing. Rolling in the muck is not the best way of getting clean." 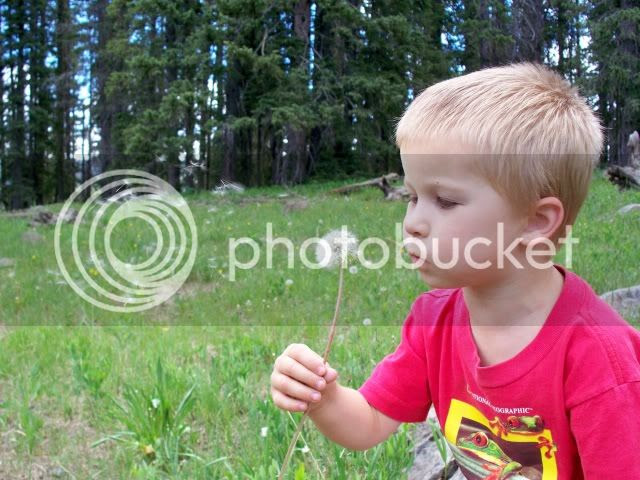 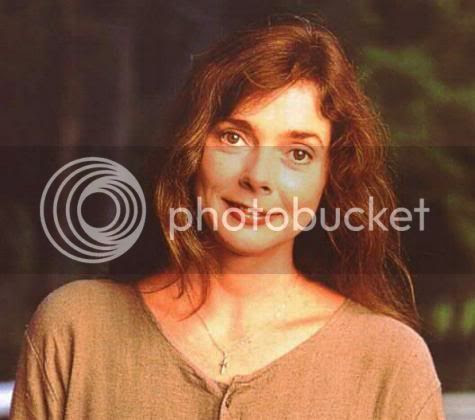 From a distance we all have enough
And no one is in need
There are no guns, no bombs, no diseases
No hungry mouths to feed

From a distance there is harmony
And it echoes through the land
It's the hope of hopes, it's the love of loves
It's the heart of every man

It's the hope of hopes, It's the love of loves
It's the song of every man
No comments:

She's using her fingers to anchor the gum instead of her teeth as that has been yet unsuccessful. Pretty cool how she figured that out by herself! She has done nothing but blow bubbles since she figured it out. Her brother is fascinated, of course. 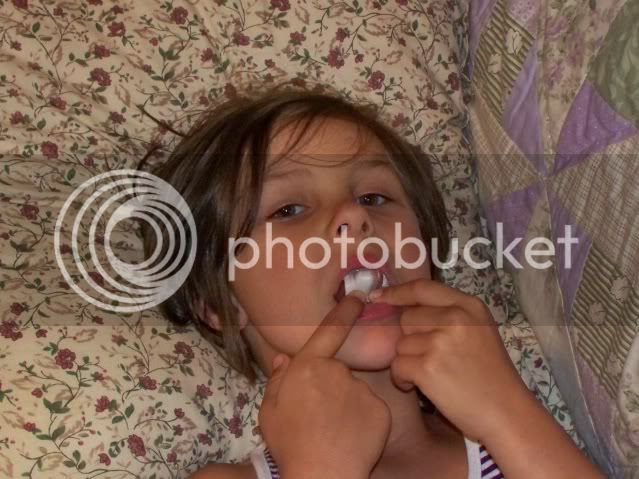 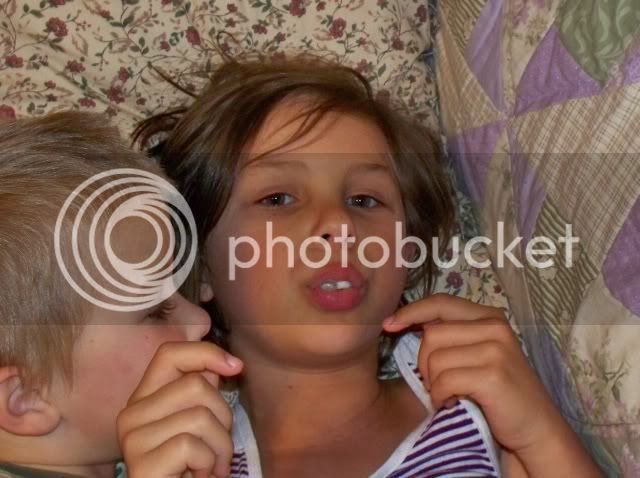