She is 5 years and 7 months old. This computer drawing of Rhetta's just blew me away! I had to snap a picture because she closes them before I get any chance to save them on the hard drive. Still, it's really amazing. She used the line and circle drawing features, yes, but the proportions are incredible and the image in the mirror - it stops at the edge of the mirror! She's good. 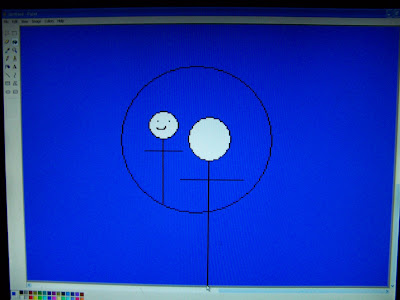 We took them to the park after supper. We were by ourselves until the soccer practice let out and a bunch of kids came over to the play area. A girl jumped on the springy thing opposite of Rhetta, they bounced for a little bit, then the girl said, "Wanna go play on the slide?" and while they jumped off and ran together to the slide Rhetta said, "Yes slide!"

So what's so cool about that? Three things she never does in combination, she 1) acknowledged the girl who spoke to her, 2) responded immediately with action, and 3) accepted the invitation verbally.

Rob and I had tears in our eyes. It was all very amazing.
1 comment: 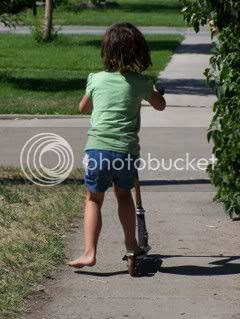