This is our new business. Our small town doesn't have a recycling program, and the nearest recycling center is in the next county, so we saw a way to fill that need. So far it is going very well. Rob takes care of most of it on his Fridays off from his regular job and the kids are so into it our customers ask after them when they don't happen to come with. Mainly, "Where are your funny little helpers?"

This is a very popular song in our house (isn't he cute?):

In my two minutes of spare brain time per day I am a writer, but since I have already used up those two minutes today I will quote this article. It states all the good reasons I try to share with people when they ask me "Why bother?"

Why Everyone Should Recycle

Recycling is sort of like exercising: we all know we should do it, but not all of us do it as often as we should—and some of us don’t do it at all. However, there are lots of reasons why you should make an effort to recycle as much as possible. If you haven’t been diligent about recycling your garbage, here are seven good reasons why you should start.

It cuts back on global warming. Our planet is starting to feel the effects of global warming already—and we need to do whatever we can to lessen the impact. Production of certain materials from scratch can release significant amounts of CO2 into the atmosphere. Aluminum production is a prime example—producing new aluminum creates 95% more CO2 than recycling old aluminum cans. In addition, recycling paper saves trees—for each ton of paper recycled, 17 trees are saved. Each of these trees can extract around 250 pounds of carbon dioxide from the air in a year.

It keeps our landfills from overflowing. We’re fast running out of space for landfills—especially near cities. Seaside cities have been dumping trash into their oceans for decades to circumvent the problem, but with widespread marine ecological collapse, this is no longer a viable option. Worse yet, it’s difficult to find land in suburban and rural areas whose residents will allow landfills to come into their areas without a fight. The squeeze for landfill land is only going to get worse in the future.

Recycling gives us some hope for this bleak scenario. Studies show that 60% to 75% of garbage in landfills can be recycled. That means that if everybody recycled, we’d have 60% to 75% less garbage in our landfills, and we’d need at least that much less land for garbage disposal.

It improves the quality of our groundwater. The garbage in landfills is usually not treated in any way—it’s simply thrown in a big hole and buried over. Much of this garbage is not environmentally friendly or readily biodegradable—and it’s no surprise that contaminants can get into our water. Rain and other runoff from landfills gets into our streams, rivers, lakes, and other waterways, damaging fragile ecosystems. It’s also a major reason why it’s not safe to drink from streams and rivers when you’re hiking and camping—even when it looks like you’re in a pristine environment. Recycling reduces the trash in landfills, and the more we recycle, the more our water systems can start becoming as pure as they look.

It reduces air pollution. Many factories that produce plastics, metals, and paper products release toxins into the air. Recycle these materials, and there will be less need for companies to manufacture new materials—saving on the amount of pollution dumped into our atmosphere. In addition, disposing of certain recyclable materials can also produce significant pollution. For example, plastics are often burned in incinerators. Plastics are made with oil, and that oil is released into the atmosphere when the plastic burns—creating serious greenhouse-gas emissions.

It creates jobs. From manufacturing to processing, from collection to invention—it’s no secret that recycling is a growth industry, earning billions of dollars annually. Our need to recycle is only going to grow more urgent as populations grow and as technology changes. Recycling creates far more jobs than landfills do—enough jobs to make a big difference in a small town.

It adds to property value. It’s obvious that a landfill near your home can decrease your property values significantly. Recycling reduces the amount of land needed for landfills. This reduces the number of houses near landfills, keeping property values up and homeowners happy. The more people recycle, the fewer landfills we need—and if enough people pitch in, recycling should pay off for everybody.

It’s good business. Pitting business against the environment is a lose-lose situation: everybody suffers. And yet, that’s how the debate has been framed in politics and the public sphere for years. This is a shame, because the truth is that recycling just makes good business sense. Industrial factories and processing plants save plenty of money on energy and extraction strategies when they use recycled materials instead of virgin resources. They also ensure that basic resources don’t become a scarce commodity, keeping demand and prices down and ensuring that their business can continue for decades to come.

One person can make a difference. With so many good causes, it’s easy to get discouraged—especially when the problem is so widespread that it’s hard to see what difference your individual effort is making. Many people think this is true with recycling, too—but the truth is that small acts of recycling make a big difference. For example, recycling just one large newspaper would save around 75,000 trees. On average, each person in the U.S. produces around 1,600 lbs. of waste each year. If you recycled all of that, you could save around 1,100 lbs. of waste per year—that’s over half a ton—just by yourself!

Need more reasons? How about the trash vortices in the Pacific Ocean?

I struggled for years wondering if one person really can make a difference. My answer to that is ultimately yes if that difference is in the form of action. Spreading the word helps educate, surely, but unless you are actively doing something to make a difference then we're never going to get anywhere... like Congress.
1 comment:

I've been working on some ruffled skirts using this tutorial to great success. I have modified it twice to fit various other sizes. So simple and so incredibly beautiful.

I thought I'd share a little fabric tease because it is making me so happy to work with these prints I just had to spread it around.

Made some executive decisions again this year and although you may not notice the differences it needn't matter. The end result speaks for itself. :)

The Morning That Got Away

My oldest of the purple lavender plants is still putting out some shoots. Much to my delight I found an albino bloom on it!

I say "delight" and not "surprise" because I have seen nature do this and other funky things many times. It is fun to find it happening in my own yard once in awhile.

Some smiles. Some silliness. Some sweetness, too.

Gallardia curling around a thorny Japanese Rose to put its face in the sun.

Stop Me if You've Heard This One

Riddles by Willon (made up entirely from things he could see from his bed pillow with the exception of the refrigerator.)

Why does the shelf have a fan on it?
Because the box doesn't have a TV in it!

Why do you tell a box in your refrigerator?
Because the shelf doesn't have powder!

Why does a bed have a curtain laying down on it?
Because the big red lunch box doesn't have a box in it!

Why does the fan have paper in it?
Because the movies don't have their books!

Why does the curtain have a fire alarm on it?
Because the lamp doesn't have water!

Why do the cars have windows for wheels to race on racetracks?
Because the ceiling doesn't have a curtain!

Why does the coffee cup have a Jack-in-the-Box toy in it?
Because the picture doesn't have a letter!

Why does the book have spelling crayons in it?
Because the fan doesn't have boxes in it!
2 comments:

I made up a word tonight. I was trying to take a picture of them together and smiling, silly me! We tried some smiles and then some funny faces. Then I asked for "super smiles". They skrinched up their faces and it totally cracked me up. But what I really wanted we some natural smiles. It is so hard to get natural smiles! So I quite spontaneously shouted SQUINKS! while they were dorking around and it worked. I got some natural smiles. But I somehow liked the funny faces better this time.

This is everything that I found blooming in my gardens this morning. I spent literally hours shooting and editing. I am so glad I did!

These are approximately half of the total number of my blooming plants/flowers. Unlike spring that blooms in stages, and fall, when blossoms are in a desperate hurry, summer blooms continuously.

Click here for the Flickr set where you can view each one individually with their descriptions. It is all that has bloomed before and since the cotton(woods) popped so that's what you're seeing if you spy any white fuzz. Keep your eyes peeled for insect-type critters, too. My particular favorite capture is the Bachelor's Button because of the iridescent green bee at its center. 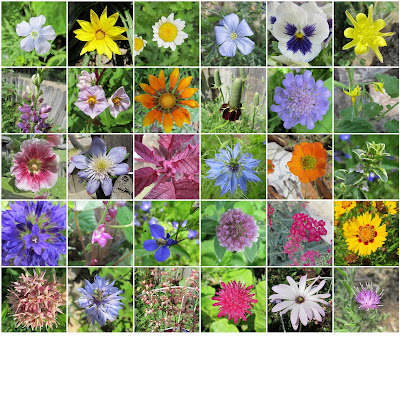 My kids are so cute! That is all.

Oh wait, that's not all. There are pictures and a video.

Kitchen cupcake ensemble from Mimi. It is essential, of course, for baking GF mini cupcakes in her Electric Mini Cupcake Maker, also from Mimi. (Miracle of miracles this is a very natural happy-smile. Ignore her choppy bangs. Those were not my fault!)

Daddy was trying to nap...

An extra of Willon because he wanted to share. He calls it his Tummy Tumble.