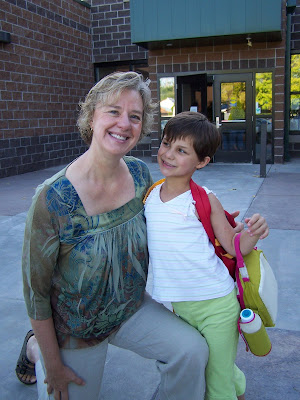 Rhetta started to get excited about three weeks ago when we marked on the calendar the first day of school. She and I have been X-ing off days since then and the anticipation grew to the point she was visibly vibrating. On Monday she convinced herself Tuesday was the first day and plain forgot to sleep. By Tuesday night she slept out of sheer exhaustion. On Wednesday, the actual first day, she was dressed and in the car a full 40 minutes before we had to leave. Willon shared in her exhuberance so they were both strapped in and ready to go before they even had their breakfast. Guess who ate their scrambled eggs in the car. Wednesday afternoon she adapted to the new homework schedule very well. Still wound up from the day she couldn't fall asleep yet again. Around midnight I finally told her that she wasn't going to school unless she would sleep in between and she promptly passed out. It's like she has a switch she can operate at will. Regardless of sleep she is enjoying school immensely this year.

Above Rhetta is pictured with her SPED teacher, our favorite person at school, Sharon Shaver. While Rhetta is fully integrated in the mainstream classroom she does get support and help from Mrs. Shaver adapting to changes, getting to and from the car,  on the playground and in the lunchroom. She is indispensable. ♥

The Cutest Boy in the Cutest Pajamas

In the one, he is doing some Kung "Food" (Fu).  In the other, he is dancing. You may decide which is which.

Rhetta came to me while I was working on the computer for a piece of note paper, a Sharpie, and a piece of transparent tape and off she went.  Then a little bit later Rob came in and said she was playing this game in the garden that she made up spontaneously.  I sent him out with the camera and he shot some video. I went out later and found her sign. 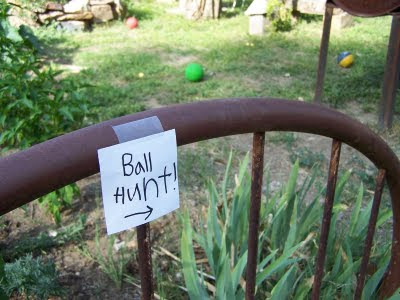 The highlight of our summer was a trip to Topeka, KS to see some much loved friends. These are not pictures from that trip. BUT, during that trip we spent an afternoon at Shawnee Lake's beach area. This was back in June. It was so much fun, in fact, that Rhetta did nothing but draw pictures of the beach all summer afterward, much like this one: 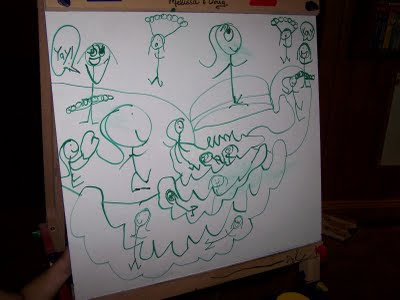 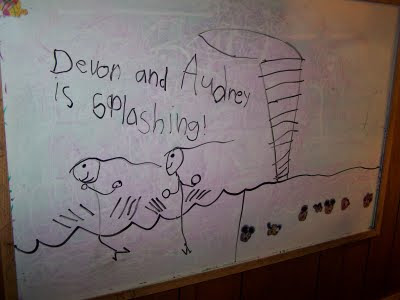 The rest of our summer was really low-key. Rhetta continued to draw pictures of and talk about the beach, though, so we took them to Ridgeway State Park where there is a small beach at Dutch Charlie and made a wonderful day of it.

Running down to the shoreline. Willon was screaming, "IT'S A LAKE!" 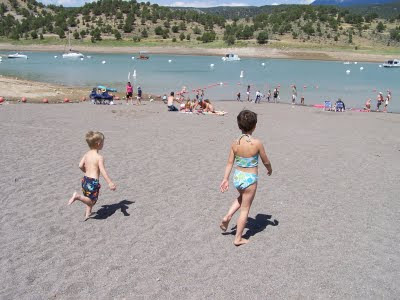 Ridgeway Reservoir is almost an alpine lake. This late in the year it is low and full of glacial waters. What I mean to say is, it was COLD! But that didn't bother Rhetta. She got in up to her neck more than once. She seemed a little lost in herself but she enjoyed the lake nonetheless. 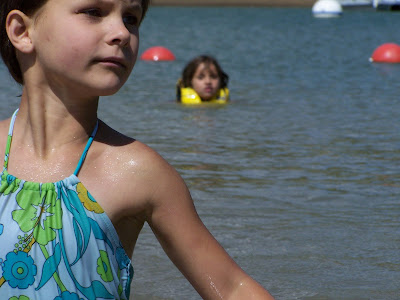 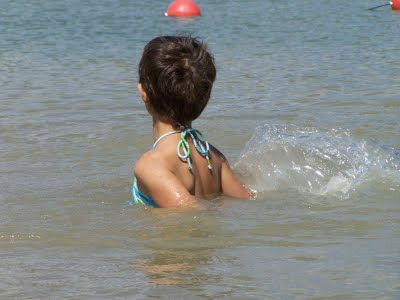 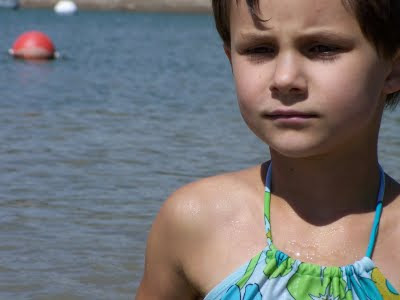 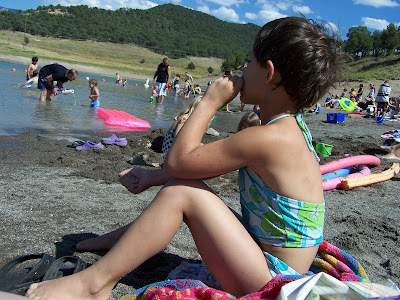 Willon spent a good deal of the time scooping dirt, throwing it in the lake, washing his hands off, then starting all over and doing it again. 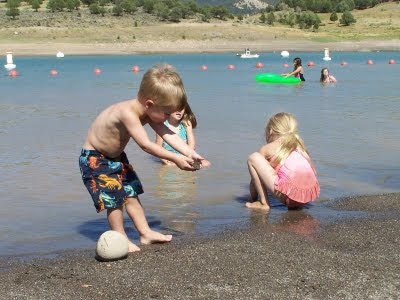 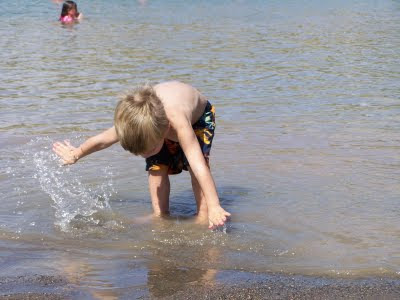 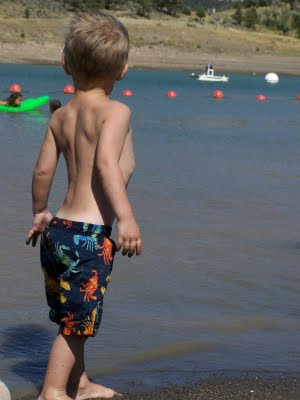 The most fun they had was making sand castles. We brought two little buckets and two little shovels and they went right to work. They worked together for quite awhile however it quickly turned into Rob and Rhetta setting them up and Godzilla (you know who) knocking them down. They could barely keep up! LOL 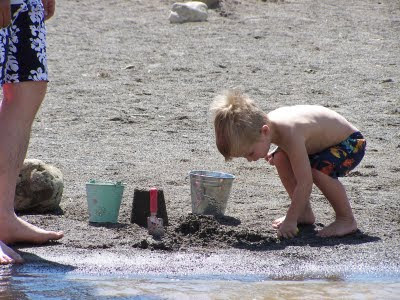 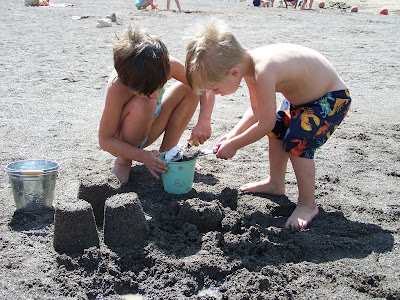 Even Rob got his feet wet. 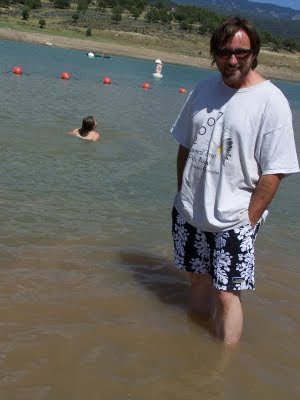 Far above the shoreline is a playground that we couldn't miss before leaving because it has this awesome slide made out of conveyor rollers! Willon popped a button in case you were wondering, and in his video he squeaks, "I did it!" They went down a time or two then I taught them to make a sound while they rolled. Huge hit! And that was our day.

Rhetta had a music lesson today. She picked up a child's violin and did really well learning the four strings. What she really wanted to do, though, was play the electric bass again.

Here is Hound Dog, as played by David (her teacher) and Rhetta. p.s. One chord she plays toward the beginning without even looking at her hands and gets it right. 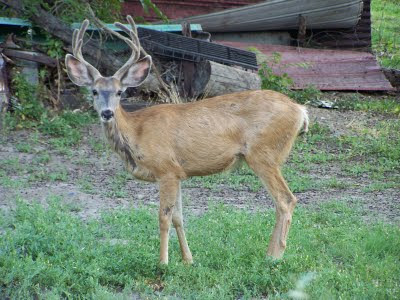 For you city folk who don't know what an 8 point buck is, it's a male deer with 4 points on each antler. That makes him a 4 year old, if I remember correctly. We have one hanging around the neighborhood. Not uncommon with peach trees in the backyard and a big pond next door, but rare to actually see them. Rhetta I don't think has ever seen any of the neighborhood deer. Until tonight. (That's the actual deer in the picture only in the neighbor's yard 2 days later.)

Rhetta and I were planting a pretty champagne poppy I got from our dear friend, Linda, out at Living Waters. She's got all her plants on sale as it's the end of the season so I have been getting one or two at a time from her at the farmer's market every Saturday. Rhetta has loved having things to plant! She shovels the dirt and holds the hose.

So tonight, as I went to turn on the water to the hose, I saw the buck about 100 feet down the driveway toward the back of our property. I had seen him in the street a few days ago and found tracks this morning all over my garden. I called Rhetta over and she came to my side (this is a feat in and of itself as she would normally protest loudly and stay where she was but lately has come quietly when I ask her) and pointed out the deer to her. It took a few seconds until she made it out as it stood very still, not even twitching an ear. I asked her, "Do you want to get a closer look? Go ahead."

She pranced, not walked, slowly forward about 20 feet, then another 20 feet, and the buck just stood there staring. Maybe he thought he was invisible? She pranced a bit closer - about even with the coop. Then still looking at the buck she pointed to the coop and said, "That's a chickens!" I guess she thought he had never seen chickens before?

I must say I was a little nervous because I have heard of deer charging, but I also knew he wasn't cornered so would most likely take off the way he did.

She didn't seem to disappointed afterward. She came back and we finished planted our flower.  :)